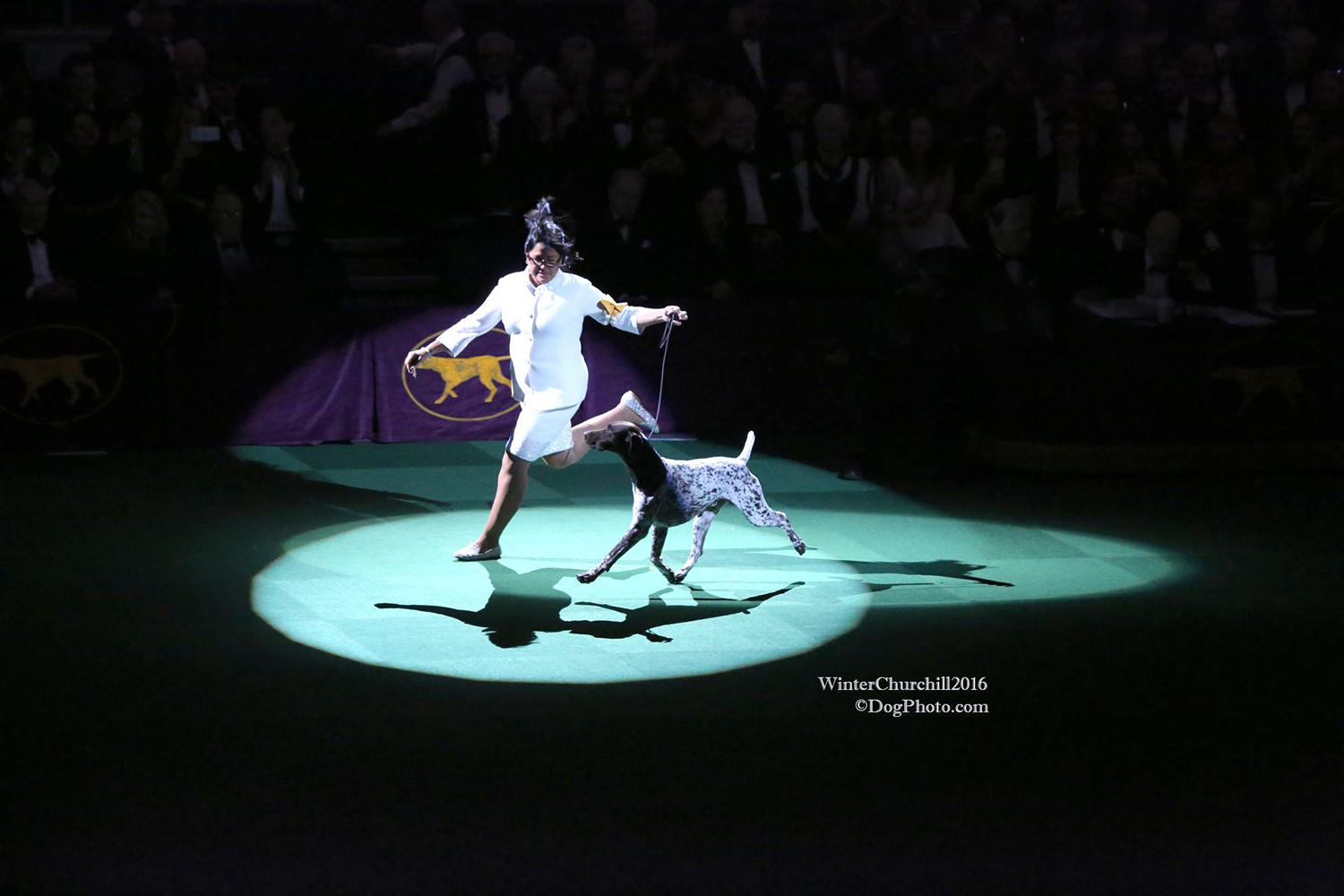 The red-hot flame of passion burns intensely through the veins of all dog lovers at the Westminster level. It starts as an ember years before stepping onto the famous green carpet, when dreams are ignited by a hair-raising glance at a puppy – a look that instantly takes away breath and captures the imagination. These hopes and dreams are part of the endless cycle of fascination, love and toil with dogs. This is the story of generations of top winning show dogs.

Because of a small cadre of inspired and dedicated dog breeders throughout the world, our families of dogs as we know and love them survive – and thrive - unto this day. Like the people they accompany through the annals of time, purebred dogs have family trees peppered with great characters that came before them.

One such “ember” started in the frozen wilderness of 1927 Montana: a physician by the name of John Thornton sat by firelight with an English Setter at his feet, reading about a sensational new breed of dog from Germany. Within a year of that fireside introduction, Thornton had imported a pregnant female German Shorthaired Pointer and history for that breed began in American.

Over the next thirty years, other enthusiasts took Thornton’s lead and began fostering this sensational new “continental pointer” and the breed caught the imagination of an entirely new generation of American sportsmen who wished to have a family dog that could also make a great companion afield. The breed’s popularity spread like wildfire across the United States.

By the 1950’s a tall outdoorsman by the name of McGillvary had picked up on Thornton’s vision. Living in the wilds of Washington state, he bought dogs from the old doctor as well as from others who had fancied the breed. McGillvary named his breeding program for the great Columbia River which flowed alongside his farm, selling his good pups to those sportsmen who traveled to Washington for his guided hunts.

Soon, those Columbia River dogs became a “best kept secret” and gentlemen sportsmen throughout the country began seeking out “the old Scoto-Indian” for a gun dog of their own; and by the 1960’s a real estate salesmen by the name of Walter Shellenbarger was carrying the Columbia River torch. “Walt” was married to a beautiful, young woman named Jo; they had a firstborn child “Gretchen." The young family met McGillvary at a California dog show, and followed his 1937 Chevy half ton all the way back up through Oregon, up the Columbia River gorge to the old man’s Washington kennel - where they purchased some of the best dogs this country had ever seen.

Blessing their hunch in dogs by naming their breeding program after their oldest child, Gretchenhof German Shorthaired Pointers began with a big splash when their homebred female Gretchenhof Moonshine Patches became an overnight sensation and a huge Breed winner at the great Westminster Kennel Club. Patches’ miraculous victory at a hotly contested Best of Breed at Westminster during the 1960’s ruffled the feathers of all the eastern bird dog breeders. Now, even more serious dog breeders threw their hats into the ring - everyone mad about capturing their own lightening in a bottle - their own gun dog who could also trot the heady, purple ropes of Westminster.

In 1970, Jo flew to see a litter of puppies descended from the best blood of Gretchenhof. As the story goes, the pick puppy was too precious to risk shipping him in a crate on an airplane so she tucked the 8 week old pup inside her oversized handbag and flew home to Palm Springs - naming the pup Traveler to denote their journey, and officially naming him Gretchenhof Columbia River as a tip of their hat to the old Indian.

By the time he was two years old, Traveler was an AKC champion and known for his beautiful sound body and mind. He was Walt’s personal gun dog companion, the friend and protector of the Shellenbarger children and a Best in Show winner under Jo Shellenbarger’s steady hand. In 1974, the sensational Ch. Gretchenhof Columbia River took New York by storm, winning the breed at Westminster kennel Club under famed AKC judge Mrs. Anne Rogers Clark and later that night, bringing down the house with an incredible first for the breed: Best in Show, Westminster Kennel Club, 1974

It was about the same era as McGillvary that a young, man in upstate New York, Thomas Bradley III, was bitten by the sporting dog bug. Bradley III soon acquired a young female which he studiously bred to a magnificent dog possessing both physical prowess and great hunting instinct. From this breeding came a female by the name of Hope v. Lufthansa - who produced a gorgeous pup who was a “hunting fool.” That son of Hope grew up to be the great Dual champion Erik v Ezstrand - without whom, our story could not be told for Erik is behind “everything that is good” in modern American German Shorthaired Pointer bloodlines.

All good dreams begin from the tail of another’s. As a young girl, Valerie Nunes followed her beloved step-father on his many bird hunts with the family’s German Shorthaired Pointer. As father and daughter watched the rising star of the fabulous Traveler, Valerie made it her childhood’s greatest wish to breed dogs as great as he. One fateful June morning, a ten year old girl met her idol - the great Traveler; and the Shellenbargers began mentoring the young girl, fostering her natural talent for breeding and showing dogs.

Under their guidance Valerie blossomed and in 1981 she herself was in the Westminster spotlight as Best Junior Handler in Show. From there, her studious mind focused more closely on pedigree research. Breeding dogs on this level is both a labor of love and an art form and over the years, Valerie studied the art and sensibilities of other good breeders, including famed AKC breeder and judge Thomas Bradley III of Watertown, New York. Choosing pedigrees very wisely and working together with other studious breeders, a female German Shorthaired Pointer of their meticulous design became the second German Shorthaired Pointer to win a Best in Show at America’s greatest venue - the Westminster Kennel Club. This 2005 winner became immortalized as the great BIS/NSC CH Kan-Point VJK Autumn Roses, with a call name of “Carlee.”

Valerie had only one opportunity to select a sire for Carlee. Valerie’s experience and learning paid off; she chose wisely, creating “Carlos.” Carlos went on to sire today’s most famous German Shorthaired Pointer - so appropriately named GCHG VJK-MYST Garbonita's California Journey, “California Journey” or CJ for short. His California Journey included a trip to the Best in Show platform at Westminster in 2016.

Speaking of lifetime achievements and the interconnectedness of the dog world, that young man with the lofty name of Thomas Bradley III, grew up to the be show chairman of the great Westminster Dog Show. After years of dedicated service to the sport of purebred dogs, Bradley retired from his position and was rewarded by an invitation to judge Best in Show at the 2017 Westminster Kennel Club.

Will CJ defend his title? Maybe yes. Maybe no. Regardless, CJ is a symbol of all that is great about breeding dogs and a living triumph to Valerie herself, who keeps him as her house pet and best friend to her two young children. Valerie and co-breeder Yvonne Hassler-Deterding will go down in history as carrying on the great tradition of beautiful gun dogs to show and shoot over; a benchmark of excellence that inspired and excited Dr. Thornton to act ninety years ago.

The road to Westminster is a challenging one – almost impossible to describe to someone outside the sport. Perhaps another great dog with a pedigree similar to CJ's will emerge, symbolizing all that is great about breeding dogs and the commitment breeders have for their dogs and sport. No other dog show offers the prominence and drama of Westminster. It inspires dogs and breeders alike, further building and demonstrating the bond between dog and man.