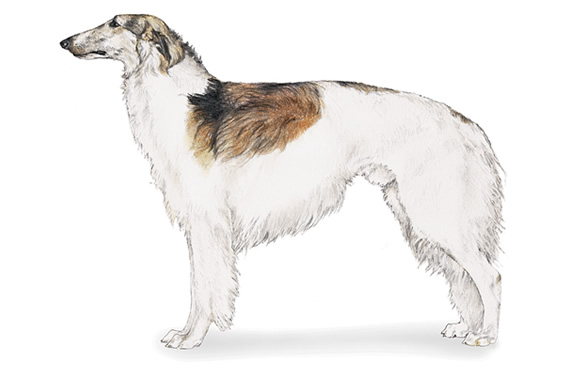 The Borzoi is a large, longhaired sighthound that was known as the Russian Wolfhound in America until 1936. They were developed through crosses between Arabian greyhounds and a thick-coated Russian breed and have been kept by the Russian aristocracy for hundreds of years. Borzois were used to hunt fast-moving prey such as hare, fox, and wolves on the expansive steppes of Russia and would sometimes be hunted in packs of over 100 dogs! Though large, their relatively undemanding, catlike nature makes them very adaptable to household life. They are affectionate with their owners but also rather independent. Daily exercise is a must but their strong prey instinct necessitates them being on a leash or in a fenced area. Their long coats can be flat, wavy, or curly and require regular brushing and bathing.