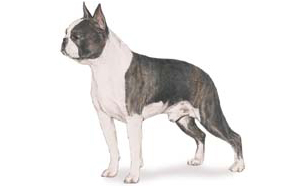 The “All American” Boston Terrier is widely known for its merry, captivating personality and intelligence and is one of our most beloved breeds. Oddly enough, they were originally developed as fighting dogs in the stables of Boston, Massachusetts following the Civil War. “Hooper’s Judge”, an imported bulldog/terrier cross became the foundation for almost all modern Boston Terriers and they became an official breed in 1891. Their dapper appearance and genteel nature has earned them the nickname “the American Gentleman” as well as great popularity as a companion and house pet. Their grooming and exercise needs are moderate, making them suitable for apartment life. They are very trainable and crave the company and attention of their people.