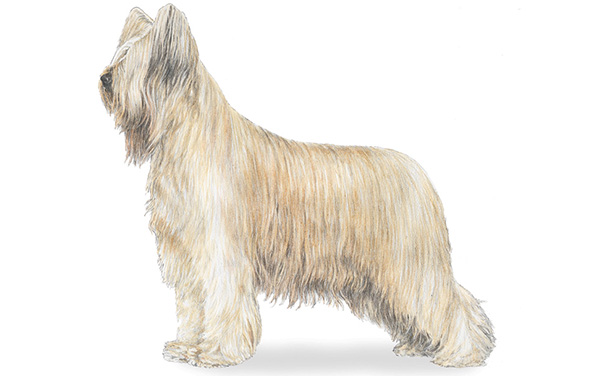 Valued for its skills as both guardian and stock dog, the Briard has been a beloved native breed of France since the Middle Ages. Depictions of this beautiful, utilitarian breed are found in tapestries dating to the 8th century and it is mentioned in written records from the 12th century. Briards were originally used to protect their masters against attacks from wolves and poachers but, after the French Revolution, their work gradually became more centered on herding flocks and guarding their owners’ property. Their history on this continent is hazy but both the Marquis de Lafayette and Thomas Jefferson have been credited with bringing the breed to North America. The Briard is an intelligent, independent working breed that needs physical and mental activity to keep them from getting bored and unhappy. They are protective of their home and family by nature but early and continued obedience training and socialization will enable them to function well as a family pet. Their long, luxurious coats need daily brushing to keep them free of mats.