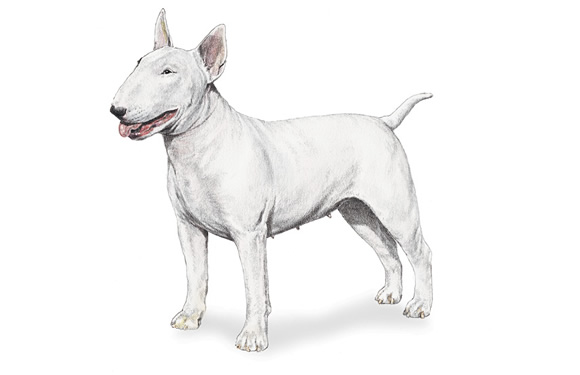 The clownishly captivating Bull Terrier has become somewhat of a media icon because of their widespread appearance as brand mascots over the last few decades. They are indeed very charming dogs in both character and appearance, despite having what could be described as an intimidating, muscular build.  Bull-dog/terrier crosses were popular as sporting breeds in the 1800’s and a more refined version of these was developed by dog dealer James Hinks around 1860. Their white coat set them apart and the dogs soon were established as a new breed that was referred to in these early days as “White Cavaliers”. They were later crossed with Staffordshire Terriers to produce a colored variety. Bull Terriers are very friendly dogs with bright, fun-loving personalities and do well in obedience, agility, and conformation. They thrive on human contact and bond very closely with their families. They do well with children but are an excitable breed that needs obedience training and daily exercise. Their short coats do not require much maintenance.