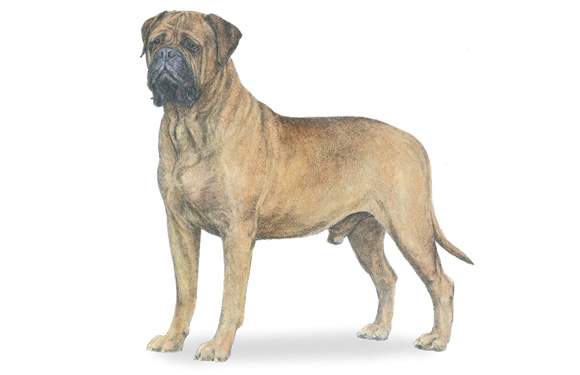 The Bullmastiff is a powerful breed of impressive intelligence and trainability that was developed in England around 1860 specifically to dissuade poachers from entering large estates and preserves. The gameskeepers wanted a dog that was fast and strong enough to catch and overcome poachers without mauling them. Mastiffs and Bulldogs were crossed to yield a dog was more aggressive and lithe than the Mastiff but not quite as ferocious as the Bulldog. Today, they more known for their courageous but gentle and discerning natures and are quite agile for their size. They do well in canine activities such as obedience, agility, conformation, tracking, carting, and therapy work but they are independent thinkers so require a very patient, positive approach to training. Bullmastiffs are natural guardians whose imposing presence is generally enough to dissuade any ne’er-do-wells but do not bark much. Their grooming and exercise needs are low to moderate and they adjust well to a either urban or rural living.