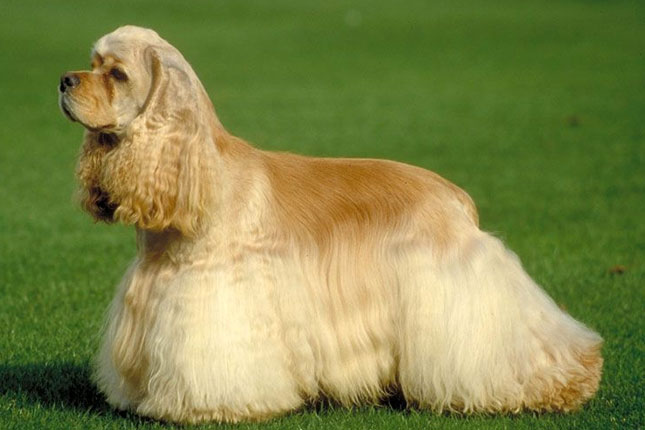 The Cocker Spaniel is the smallest of the spaniels and Sporting Group but still a capable, driven gun dog able to cover a lot of ground at considerable speed and with great endurance. Their merry, lovable dispositions and intelligence endears them to many as household companions as well, this versatility of purpose no doubt contributing greatly to their popularity as a breed. Spaniels have been aiding hunters on their outings for centuries and “Cocker” was the name given to the smaller spaniels used for hunting woodcock. Originally, Cockers and Springers could be found in the same letters and were names used to identify size and purpose before they became distinct breeds. The Cocker Spaniel’s coat can be silky, flat, or wavy and should be brushed weekly and trimmed every few months to keep tangles away. Black, black with tan points, parti-color, and ASCOB (any color other than black) are all acceptable coat colors. Though popular as house pets, they are an active sporting breed that needs regular exercise.