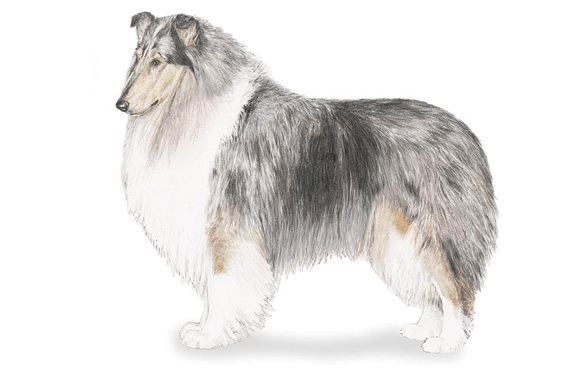 The Collie exists in the minds of many as the epitome of canine character and devotion, largely thanks to the Hollywood phenomenon known as “Lassie”, portrayed in various productions by a Rough Collie. These attributes are not just inventions for the silver screen, however, for the Collie was developed to be a helper to humans and continues to be valued as a stock dog and companion today. Their exact history is unknown but they have been drovers, herding livestock to and from the market for farmers in England and Scotland, for centuries. Collies found popularity beyond their rural homelands in the 1860s when Queen Victoria visited the Scottish Highland and became enamored with the breed. Henceforth, Collies were considered quite fashionable. This breed possesses many qualities that yield a great family pet – intelligence, playfulness, affectionate personality – and tends to be very good with children. They are energetic and will need daily walks but are capable of serene household behavior. Their profuse coats will need brushing about once a week and occasional bathing but are otherwise fairly low-maintenance.