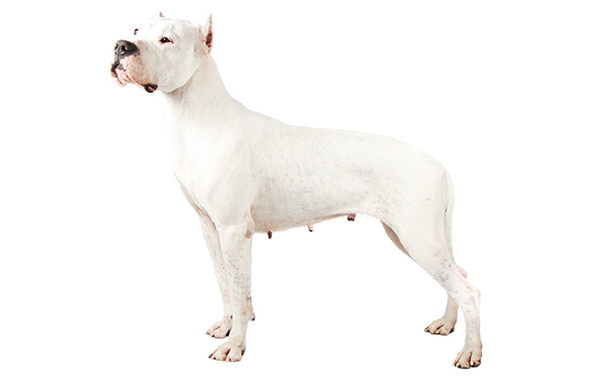 The Dogo Argentino is large and athletic, yet elegant and balanced, and has an instantly recognizeable head and short, white coat. As the name and appearance suggests, this dog originated in Argentina, and was originally bred to hunt wild boars and other dangerous game. This dog's head is strong and large, though so is the rest of its body — but again, blessed with explosive energy and agility, the Dogo is no lumberer. They also have excellent noses, which serves to track prey.

Sadly, this dog's association with fighting and criminal activity coupled with public fear has led to it being banned in several countries.

Dogo Argentinos are a large breed, weighing 88-100 pounds, stand 24-26.5 inches tall, with females slightly shorter and lighter. Their life span can be 9-15 years, and they do not suffer from as many health issues as other large breeds. While overall quite healthy, they do carry some deafness, and BAER testing is advised. Their short, distinctive white coat  does not require much grooming, nor do they shed a lot. They do require a lot of daily exercise, however: whether chasing a ball, retrieving, swimming, or hiking, these are dogs who need to be active.

Famous Dogo Argentino: in 2008, a dog namd Morocho heroically saved two young girls from a puma, possibly saving their lives. He was seriously hurt, but nursed back to health and naturally treated like a hero after the incident.