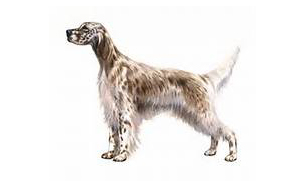 The English Setter is known for its flashy elegance and beautiful dappled coat. Energetic and intelligent, they are popular as hunting companions as well as show dogs and obedience and agility competitors. They perform a similar function to Irish and Gordon Setters but are distinct breed and one of the oldest gundogs, developed in England over 400 years ago. They are believed to have been bred from spaniel stock and were originally called “Setting Spaniels.” Before guns were used in hunting, these “Setting Spaniels” would crouch near the quarry and the hunter could sneak up and throw a net over the birds. Once guns became popular, a more upright stance was bred into the English Setter to make them more visible to hunters. As family pets, they are gentle and personable and do not do well isolated in a kennel or yard. They have high exercise needs so do best in a family with an active agenda that includes their canine companions. Their handsome feathered coat requires regular grooming and clipping.