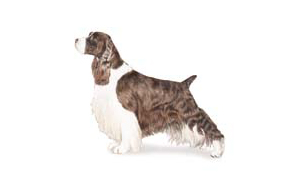 Possessing the exuberance and work ethic typical of spaniels, the English Springer Spaniel remains a popular companion for hunter and suburbanite alike. They have a medium-sized, powerful body and are known for their endurance in difficult conditions. English Springer Spaniels were originally born in the same litters as Cocker Spaniels but were separated according to size – “Cockers” hunted woodcock and the larger “Springers” were used to flush game. They were recognized by the Kennel Club of England in 1902 and their popularity in America increased upon the creation of the English Springer Spaniel Field Trial Association in 1924. This is a gregarious, affectionate breed that makes a great family companion as long as it gets plenty of exercise and interaction. Their long, silky coats require regular combing and trimming to keep them tangle free and looking their best.