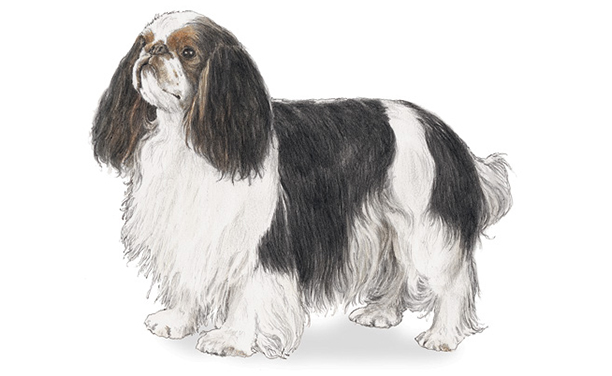 It is generally agreed that this charming and lovable character has his roots in the Far East and eventually made its way to Europe. In England, it became a favorite pet among the aristocracy as evidenced by its frequent appearances in noble portraits of the 17th, 18th, and 19th century. King James favored the black and tan variety and it was the focus in early breeding programs. This was not always the case and for a long time, English Toy Spaniels were bred with little attention paid to keeping color strains pure and several varieties could be present in one litter. Today there are four accepted color varieties: Blenheim (rich mahogany red and white); ruby (rich mahogany red); Prince Charles (white with black and tan markings); and King Charles (black and tan). The English Toy Spaniel is a naturally agreeable and affectionate companion that plays well with children and whose size and moderate exercise needs make them appropriate for apartment living. Their silky coat requires little grooming beyond a twice-weekly combing to keep the tangles away.