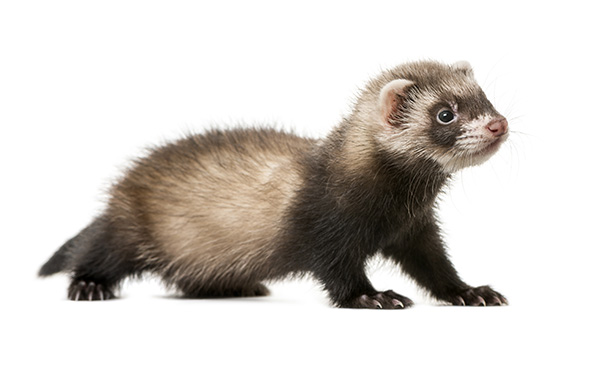 While uncertain, there is evidence that ferrets have been domesticated for as long as 2,500 years, probably for hunting, as they are excellent at ferreting out rabbits, rodents, and moles from their burrows. As pets, Ferrets are relative newcomers, though they have been growing in popularity since the 1980s. Their sleek looks and playful antics are understandably appealing to many people, though prospective pet owners should know that they are still illegal in states such as Califorina and Hawaii. They should be de-sexed before maturity unless you are planning on breeding them; not only does it prevent unwanted kits, it greatly decreases their musky odor. With patience, they can be trained to use a litterbox, too (though avoid clay litter)! A ferret's cage should be at least 30"x30" and 18" high, with cloth bedding and sleeping sacks, a watter bottle or bowl, litter box, food bowl, and of course, tunnels and toys. Like cats, ferrets are obligate carnivores, and eat many small meals per day, high in protein. They do well on dry, pelleted food, and would be delighted if you supplement it with the occasional chicken or lamb treat. A ferret can live as long as many as 12 years, though their lifespan is often closer to 8.