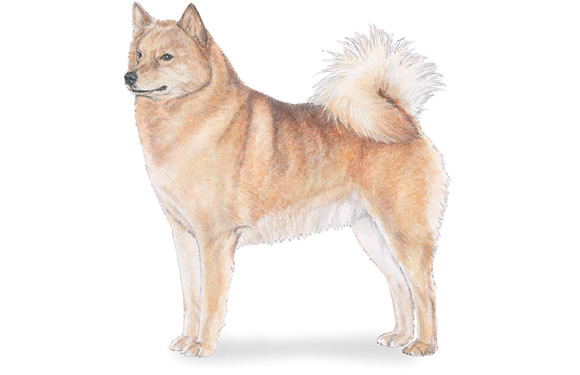 This northern breed, with its foxy features and astuteness, is also known for its agility, aptitude for hard work, and skills as a hunter. The Finnish Spitz is the national dog of Finland and was developed to hunt birds and small game. They lead the hunter to the game with their shrill barks and yelps while pointing to the quarry with their head and muzzle. The Finnish Spitz was nearly lost to cross-breeding in the late 1800s but was recovered by two sportsmen from Helsinki who recognized their native dog’s value as a hunter and national treasure. This is a social and energetic breed that enjoys spending time with its family and is good with children but is naturally aloof around new people. They require moderate exercise and their lustrous golden-red double coat will need regular brushing and bathing.