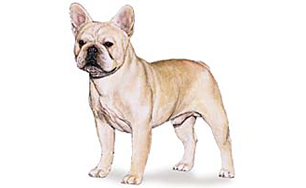 The lively and lovable French Bulldog has been a delightful companion since the 1800s when they were developed by English lacemakers seeking a down-sized version of the bulldog to serve as a lap pet. These lacemakers were displaced to France during the Industrial Revolution and their “toy” bulldogs became popular pets in their new locale. They eventually caught the eye of wealthy Americans on their “Grand Tour” of Europe, which catapulted their popularity; they became known as French Bulldogs by the end of the 1800s. Having been called “a clown in the cloak of a philosopher”, the French Bulldog is known for its affectionate nature, stable temperament, and fun-loving outlook. They have a compact, muscular build and their “bat” ears accentuate their alert demeanor. Small in size and requiring minimal grooming and exercise, they are well-suited for urban living. Like other, short-nosed breeds, they are vulnerable to over-heating so care must be taken to keep them cool during hot weather.