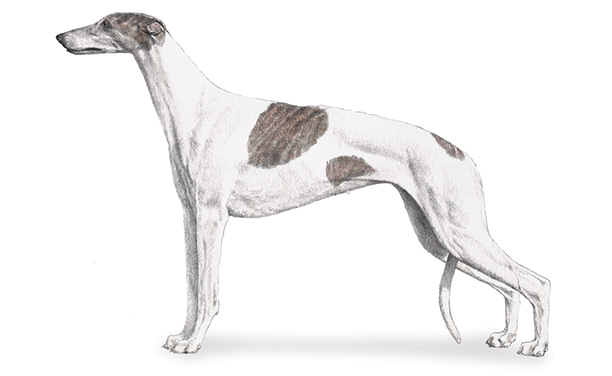 A standard-bearer of canine speed and athleticism, the Greyhound is one of the oldest breeds and has a history bathed in aristocracy and culture. Egyptian tomb carvings of Greyhounds dating back to 2900 BC provide evidence of their ancient lineage and importance to man. Once only possessed and bred by royalty, they were used in England to hunt all manner of game including deer, stag, and foxes but hare was their primary quarry. Greyhounds have been a fixture in America since they arrived with Spanish explorers in the 1500s and were some of the first recorded entries in early American dog shows. Like many hounds, they have an independent streak and their training should be dealt with patience and a sense of humor.  Daily exercise is required to satisfy their natural need for physical activity but should always be on a leash or in a fenced area as they have a strong urge to run after anything that might catch their sharp eyes. Despite their athletic proclivities, they make docile and affectionate family pets and enjoy the company of other dogs.