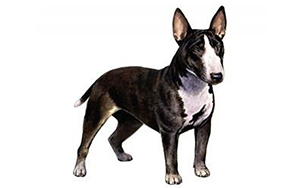 The rambunctious and comical Miniature Bull Terrier packs all the standard-size Bull Terrier shenanigans (of the best variety!) into a smaller package. Their joviality and distinctive oval head shape have endeared them everyday admirers as well as popular ad campaigns (Spuds McKenzie anyone?). It’s hard to believe they descend from dogs bred specifically for their ferocity and fighting skills. They were originally created through crossings of the Bulldog and the now extinct White English Terrier and were typically about the same size as the Miniature Bull Terrier. Spanish Pointer was added to the line early on to increase their size. This cross resulted in a variety of sizes so the breed was divided in to Miniature and Standard sizes. They are strong, driven dogs with a sense of humor and fearless demeanor. Training is essential, especially in a household with small children who may be overwhelmed by their energy levels. They are not recommended for households with non-canine pets such as guinea pigs and other rodents that might trigger their terrier instincts. Their coats are short and low-maintenance.