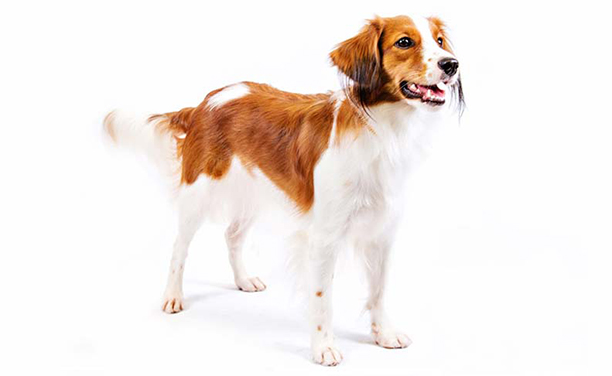 Originating in the Netherlands and popular in the 17th and 18th century, the Nederlandse Kooikerhondje is a highly athletic and intelligent working dog. Their primary job was to lure ducks into elaborate enclosures (Kookerhondje translates to "small cager dog") -- complex work that requires a high degree of independence and cooperation between Kooikerhondje and its human parters. After nearly going extinct in World War II, the breed has started to make a comeback, and is becoming more popular in the United States, Canada, and Scandinavia.

Nederlandse Kooikerhondje weigh 20-30 pounds, stand 14-17 inches tall, with females slightly shorter. Their life expectancy is 12-15 years. While an overall healthy and long-lived breed, they come from a small genetic stock and are susceptible to several hereditary illnesses that should be checked for. They have a long orange and white coat with a white plumed tail and a Spaniel-like appearance. Regular grooming (which most Kookerhondje enjoy), with baths are required as needed. Their nails should be clipped or ground regularly and they should have their teeth brushed, as well.

Often described simply as "happy" dogs (likely due to appearance and bearing), Nederlandse Kooikerhondje are also very spirited and intelligent, and need both physical and mental activities ("jobs") to stay occupied. They have been known to chase smaller pets through the house. While few of them still hunt today, they thrive in agility, obedience, rally, search and rescue, as well as many other dog sports and activities.

Famous Kooikerhondje: this breed was extremely popular in the 17th and 18th centuries... not just with duck hunters, but immortalized by painters like Rembrandt van Rijn and Jan Steen.