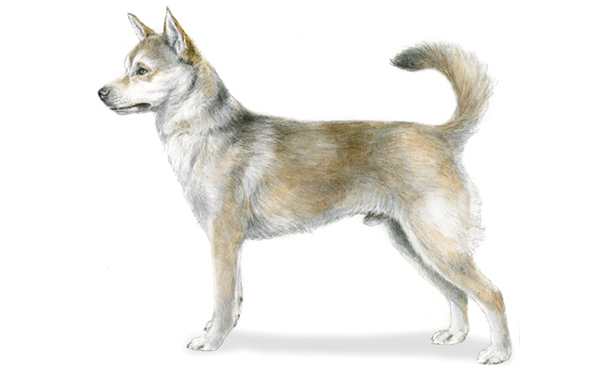 This distinctive Spitz was developed on the isolated islands of arctic Norway to hunt Puffins on and around steep, vertical shoreline cliffs. Puffins were a valuable source of meat and feathers for the Norwegians so the Lundehunds were trained to pull live Puffins from crevices and bring them to their hunter and farmer masters. These dogs actually possess several traits that imbue them with superior Puffin hunting ability: six toes on each foot (stability), highly rotatable prick ears that they can fold close when necessary (to keep water and debris out), and a very flexible neck that can actually tip the head backward until it touches the back (maneuverability in tight caves and crevices). This is an old breed and has been described in writings for at least 500 years. Puffins have been protected since the 1800’s though so the breed lost its niche and almost disappeared. The Lundehund breed was revived by some concerned Norwegians after WW2 but still remains a very rare breed. They are even-keeled, affectionate, and entertaining companions that need no specialized upkeep apart from a wholesome diet, exercise, and occasional brushing and bathing.