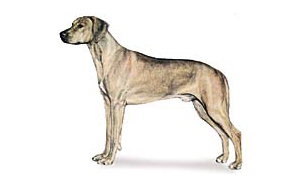 Also known as the African Lion Hound, the Rhodesian Ridgeback was developed by the Boer farmers to accompany them on their hunting trips in the African wilds. They were introduced into Rhodesia in 1877 where they became highly valued by big game hunters who hunted lions from horseback. They are large dogs with a muscular, sleek build, and short, glossy coat with their namesake fur “ridge” running up their back. These natural athletes require regular exercise and, while descended from fearless hunters, they are very people oriented dogs who crave the comfortable company of their human caretakers. They are known for being patient and loving with children and their coats require very little maintenance other than occasional