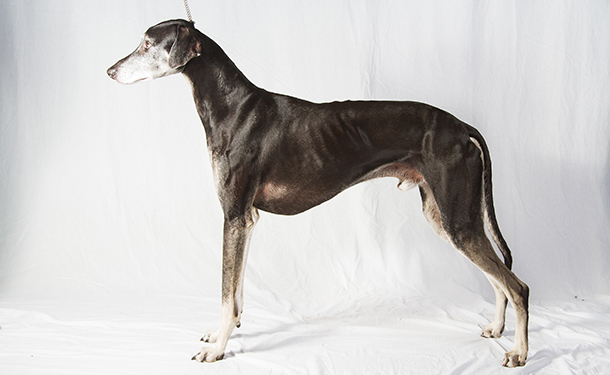 The Sloughi is an ancient sighthound that originated in Northern Africa, specializing in hunting fox, gazelle, hare, jackal, and wild pigs. Even today, they are still active as hunters and guard dogs in their land of origin. Sloughi first arrived in the United States in the early 1970s, were recognized as a breed by the United Kennel Club (UKC) in 1996, and by the American Kennel Club (AKC) in 2016. They are graceful and athletic dogs, and as long as they recieve regular activities and exercise, they are happy to be couch potatoes when indoors. Their prey drive can be overcome as long as they are introduced (preferably at a young age) to other small pets in the household. As one might expect, this breed loves to run, and excels in lure coursing.

Sloughis are a medium-large breed, typically lean, weighing 40-62 pounds and standing 24-29 inches tall. Females are generally lighter and about two inches shorter. Their life expectancy is 12-16 years. Their coats are short, smooth, and fine -- and require little maintenance compared to many other breeds. Coat color varies from light sand to mahogany red-fawn. They may have brindling and black markings. Of particular note is their long ears and large, dark, "mournful" eyes: a strong draw for many Sloughi lovers!

They are noted for being sensitive to their owner's demeanor, as well as their loyalty, though they can also be somewhat aloof or stubbon ("independent"). While a healthy breed, as with all sighthounds, they are sensitive to anesthesia and certain medications.