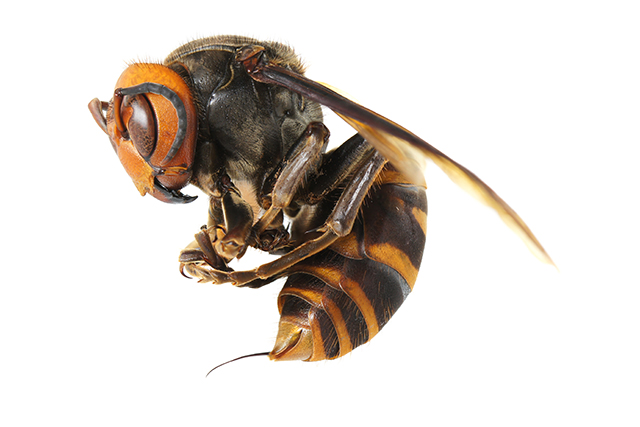 By now you have likely heard that a hornet of unusual size has invaded coastal Canada and northwest Washington state. Dubbed the "murder hornet," this colossal six-legger is responsible for about 50 deaths a year, possesses a sting that feels like "red-hot thumbtacks being driven into the flesh," and with a little help from its friends is capable of decimating a hive of honeybees in only a few hours. As a highly-focused apex predator in its environment, it certainly lives up to its nickname; it should be no surprise that alarms over the hornet's arrival are reminiscent of the African “killer” bee invasion of the southern United States decades ago. But what, exactly are these giant hornets, and how concerned should we be by their arrival?

The Asian giant hornet, Vespa mandarinia, is the world’s largest living hornet, with adults often growing over 40 mm (1.6 in) in length and having a wingspan greater than 60 mm (2.4 in). Queens grow to be over 55 mm (2 in) in length. By comparison, the largest hornet common to the United States, the European hornet (also an invasive species) sports a paltry-by-comparison length of 25 mm (1.0 in).

Like many bees, wasps, and ants, these hornets are eusocial (truly social), which means reproduction is left to the queen and the workers seek food and provide for young over many generations. They range from southern Russia, China, Taiwan, southeast and south Asia, and are common in Japan, where they were given the "murder hornet" moniker. If you're wanting to track down an Asian giant hornet nest, you likely won't be able to unless you live in a rural area and are looking down: V. mandarinia tend to live away from urban areas, in lowland forests and mountain foothills, and their nests are nearly always subterranean. To make matters more difficult, merely seeing one of these hornets flying past doesn't mean its nest is nearby; they have been known to travel as far as 8 km away from their homes in a day. Timing is also a factor: they tend to go dormant by December and re-emerge in mid-April.

While their stings are decidedly unpleasant, Asian giant hornet attacks are rarely actually murderous. Statistically speaking, as far as deaths caused by non-human animals go, the crocodile (bites), dog (bites and rabies), and even the unassuming tsetse fly (parasitic infection) are much deadlier. The people with the most to worry about when it comes to the murder hornet are beekeepers, where the hornet's hyper-focused predatory nature can make short work of an entire hive of European honeybees.

When an Asian giant hornet scout locates a honeybee nest, they produce a pheromone (chemical odor) that attracts the other hornets to the bee nest. The European honeybee, Apis mellifera, which has evolved under human care for centuries in Europe and is favored by many beekeepers, has never faced this predator and has no effective method of defense. When a scout manages to communicate the location of a honeybee nest to its fellow hornets, the scene quickly becomes a slaughter: each hornet is capable of killing up to 40 bees per minute; working together, they can wipe out a hive in a matter of hours, bringing back a feast of delectable bee body parts, larvae, and honey to their own nest. Apis mellifera stands no chance.

However, in the case of the smaller and faster Asian honeybee, Apis cerana, the guard bees will alert nestmates. They will swarm over the hornet forming a ball completely around it. But instead of trying to sting through the hornet’s hard armor as you might expect, their muscles “quiver” and produce heat. This rise in temperature and in carbon dioxide exceeds the limit the hornet can withstand, and the hornet is “cooked” at 117 ̊F (47 ̊C). Since the bees can withstand a higher temperature, they survive, and the scout hornet never gets to alert the other hornets with its pheromone.

As for what the Asian giant hornet means for the U.S. and Canada, we cannot say. This is certainly not the first invasive insect we have seen. Or even the first invasive hornet: the European hornet, Vespa crabro, mentioned earlier, which was the largest hornet in Europe, was introduced by European settlers to North America between 1840 and 1860. It slowly expanded its range across the eastern half of the United States, stopping in the Dakotas. But while the European hornet has been integrated into American ecology without economic or safety concerns, it is not yet possible to predict what will happen with the Asian giant hornet. While location and eradication efforts are underway, we don't even know for sure if it would succeed in forming an established population. We do know, however, that beekeepers and farmers in Japan and other parts of Asia have learned how to cope with these voracious hornets.

Whether the Asian giant hornet will permanently establish itself in North America, and if so, how far it will range, is yet to be determined. That will have to wait at least until this fall to determine if their numbers have grown, more nests are established and more workers are observed. My colleague who is a specialist on bee biology notes: "One or two nests is not a population. Colonization success often depends on the numbers of founders, their genetics, the genetics and dynamics of the mating system, and sometimes requires successive introductions. It is important to remember that most introductions fail. We are generally only aware of those that succeed."

John Richard Schrock - NAIA Board Member
Dr. Schrock is a Roe R. Cross Distinguished Professor and Professor Emeritus in the Department of Biological Sciences at Emporia State University where he continues to serve on graduate faculty. He directed ESU’s biology teacher training program from 1986 to 2016 and is editor of the Kansas School Naturalist and Kansas Biology Teacher.