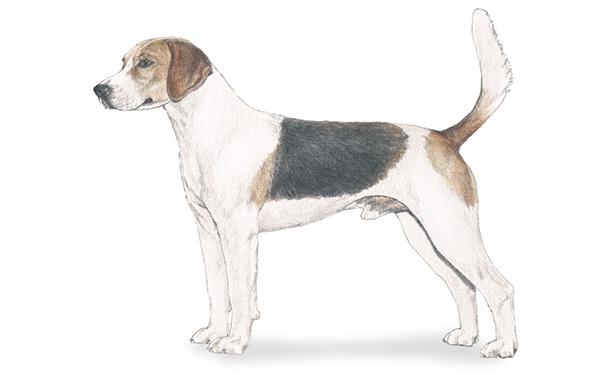 This compact cousin of the English Foxhound was developed to hunt hare in packs and at a slower pace that was appropriate for hunts on foot. Harriers were brought to the new world from England during colonial times and have been used for hunting as long as any other scent hounds in the United States. Though bred down in size from the English Foxhound, the Harrier is still a sturdy, large-boned dog with great endurance that can hunt effectively in any terrain. They are personable, pack-minded dogs that get along well with other animals and are very people-oriented. Daily exercise is a must but they need to be kept on a leash or in an enclosed area as they have a strong urge to run and follow their nose. Due to their intelligence, they are easily trained and excel in tracking and agility. Their short coats require little maintenance other than occasional brushing to keep up with shedding.