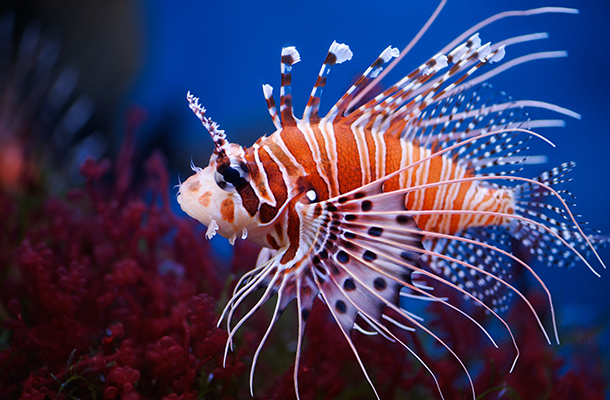 Despite the potent venom found in their dorsal fins, several species of lionfish are popular in the aquarium trade and their generally peaceful natures and hardiness make them appropriate for intermediate marine hobbyists. While some species of lionfish can grow well over a foot long, requiring very large tanks, there are several smaller species appropriate for small tanks in the 30-50 gallon range. They are carnivores that will devour any fish or invertebrates that fit into their cavernous mouths, so they should be kept with similarly or larger sized peaceful tank-mates. Lionfish like to hide out in caves when not out hunting, usually at dawn and dusk, so provide them with places to escape from view. Some species of lionfish, such as, P. volitans and P. miles, have become invasive species as they move beyond or been transplanted from their native tropical habitats.