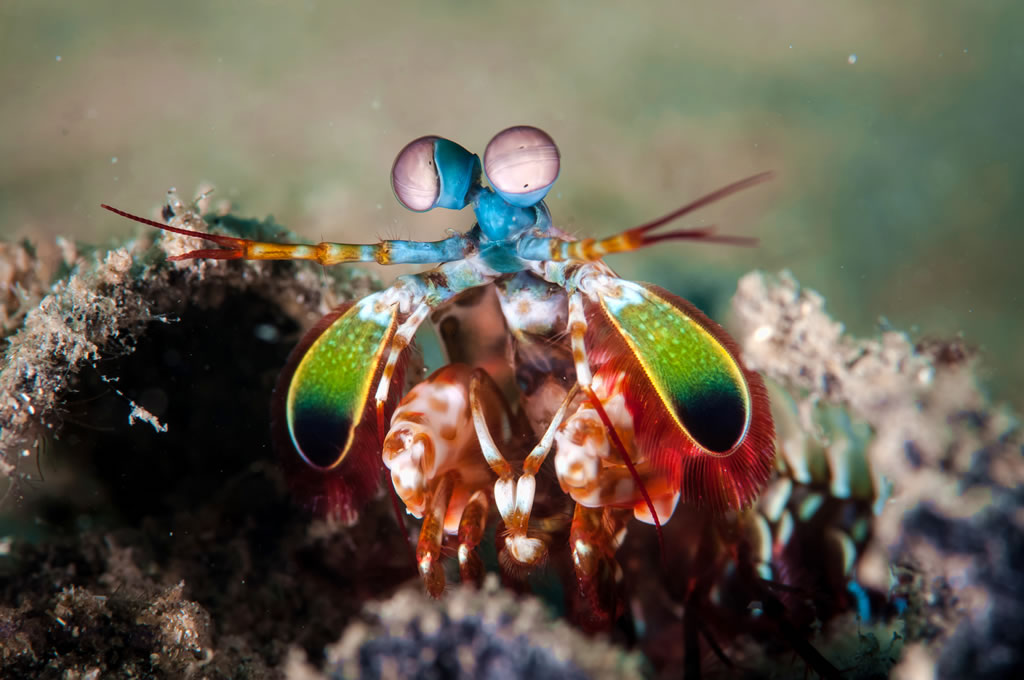 The mantis shrimp is not actually a shrimp, but a different kind of crustacean of the order Stomatopoda, known for its aggressiveness and formidable weaponry. It possesses extremely sharp, powerful claws that can split a human finger in two, with larger species of mantis shrimp able to break aquarium glass with a single strike! Mantis shrimp are voracious predators found in tropical and sub-tropical waters.

But while the mantis shrimp’s claws understandably get much of the attention, their strength and capacity to cause damage at least fall within the realm of things we can perceive. We can see an injured thumb or shattered glass and understand what it means, but with their extraordinary eyes, the mantis shrimp may be capable of seeing colors we can’t even imagine!

Their compound eyes have 16 color receptive cones (compared to the 3 found in humans), and are capable of perceiving polarized light and multispectral images. Each eye is divided into three regions, giving each eye trinocular vision, meaning that even missing an eye, a mantis shrimp still has depth perception. And as if that isn’t enough, researchers recently discovered that mantis shrimp eyes can even see neurons firing and detect the reflections off of cancer cells!

Could it be we have been too good at ridding our bodies of parasitic worms? Believe it or not, our efforts at keeping squeaky-clean and sanitary in the developed world may be contributing to increased allergies, asthma, psoriasis, even autoimmune diseases. The human immune system, having evolved with parasitic worms, recognizes them, and has learned to reduce inflammation and stimulate healing when these tiny intruders are sensed. While getting worms may be seen as too high a price to pay for many, for people suffering from severe allergies or colitis, it may be worth it. Victims of multiple sclerosis and Crohn’s disease have shown a promising reduction in symptoms (even remission in Crohn’s) after ingesting whipworm eggs - a treatment that may be worth it to some until a cure is found!