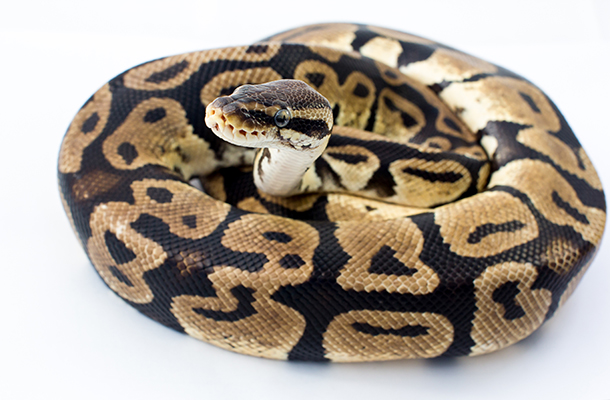 From western and central Africa, ball pythons (Python regius) usually grow to 3’-5’ and have a life span of 15+ years. They are classified as a good beginner herp pet and come in a staggering array of morphs, or color and pattern variations, with beautiful markings. Their name comes from their tendency to curl up into a tight ball if nervous or threatened. Their formal name of Python regius translates to “Royal Python” and is thought to have come from the belief that Cleopatra wore one around her wrist as a bracelet. Adults need a minimum of 30”x12” cage space with hiding places, and floor space is more important than climbing areas, as they’re terrestrial snakes. Substrate usually consists of cypress mulch, fir bark, shaved aspen or cage carpet. They need an environment humid enough to sufficiently shed and a water bowl large enough to submerge. Humidity should be in the range of 60%-80% and may require misting to get to proper levels, especially during shedding cycles. Cages are normally heated from below, known as belly heat, with the hot side of the cage at 88-92 degrees and the cool end of the enclosure at 75 degrees. They feed as babies and juveniles every 7-10 days, and as adults every 7-14 days.