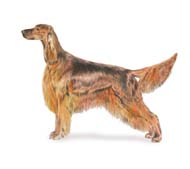 The Irish Setter is one hunting’s most recognizable canine mascots. Their flashy red coat and gallant, sporting style distinguishes them in and out of the field. They are known for their stable temperament and clownish antics, as well as their superior “setting” abilities. They first became popular throughout Ireland and the British Isles during the 1800th century. They were originally red and white in color but solid mahogany red came to represent superior quality and hunting aptitude in the 1900th century and therefore came to be the coat color of choice. Before firearms were used in hunting, the Irish Setter was used to “set” game by crouching nearby the hiding fowl. The hunters could then approach and throw a net over dog and bird. With the advent of guns, they adapted into a dog that flushed game upward into the hunters’ shooting range. This playful, energetic breed is a great family dog but requires daily exercise to satisfy their athletic needs as well as regular brushing to keep their long silky coat free of debris and tangles.