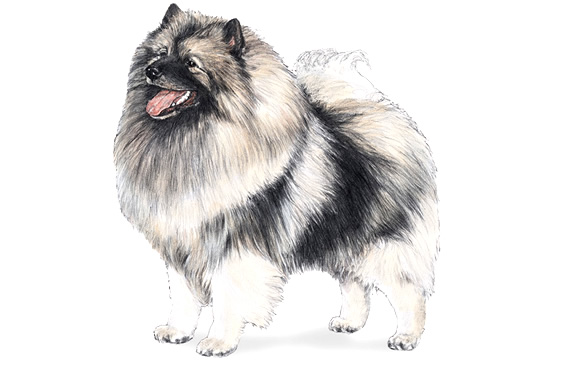 The Keeshond shares its lineage with several other breed of arctic ancestry: the Samoyed, Chow Chow, Norwegian Elkhound, Finnish Spitz, and Pomeranian. They were originally employed as guardians on farms, riverboats, and barges. They enjoyed significant popularity in Holland in the 1700s and were adopted as a mascot of the Dutch Patriot political party headed by Kees de Gyselaer, after whom they are named. Upon the defeat of that political party, the Keeshond became rare but was revived a century later and its renewed popularity spread to England and America. Keeshonds are a gregarious, affectionate breed and their “spectacled” eyes add to their expressiveness. They are intelligent and sensitive and tend to follow their owners lead in new situations. Their abundant gray, black, and cream coat does well with two weekly brushings.