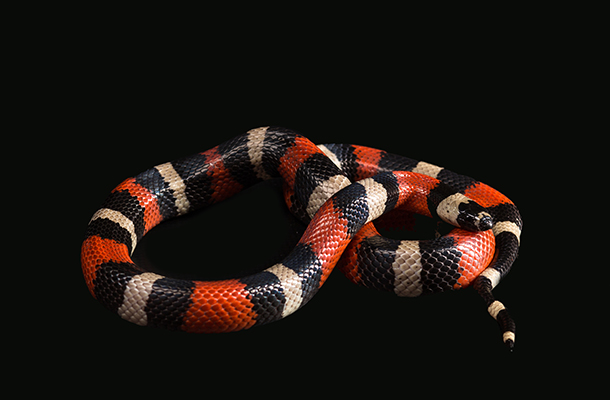 Milk Snakes (Lampropeltis triangulum) are found from Canada and the eastern U.S. all the way south to Venezuela. They are found in forested areas as well as in some prairies and rocky landscapes. They usually grow from 2’-5’ depending on their species and live for 10-20 years. Species can vary greatly in appearance, with even the same species being highly variable across its range. In captivity, you can find a variety of morphs, or different colors and patterns. Nearly all have spectacular bands of alternating colors that set them apart, but that also can cause erroneous identification as venomous coral snakes. For coral snakes, remembering the sayings “Red touches black, you’re OK Jack” or “Red touches yellow, you’re a dead fellow” help keep encounters in the wild from going very badly. They are also sometimes confused with massasauga rattlesnakes because of the segmented coloring. Milk snakes are harmless pets, though. They are nocturnal and are known to be very good at slipping out of inappropriate caging. Their environmental needs are moderate, with temperatures on the warm end of the cage recommended at 84-90 degrees, with 70-75 degrees on the cool end. Lighting cycles of 12 hours on, 12-off are suggested. Clean water should be available at all times. Adults should be kept in cages with a footprint of at least 30" x 12", but larger specimens of some species will require more room. They are among the most popular snakes for beginning herpers.

Care for a Milk State