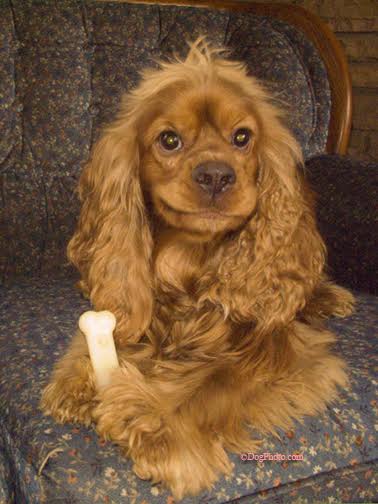 It was mid-February, 2009. I’d just come home from covering Westminster. It was cold and I was exhausted. Happy to be re-united, my dogs and I settled down for a long winter’s evening by the fire. All of us were so relaxed and happy. It seemed impossible that I would want to go online – but for some reason, I was compelled to visit Craig’s list. “Of all things” I thought to myself. “Why am I doing this tonight?” Truth be known, I was embarrassed. A form of voyeurism for those of us completely hopeless cases who really are “Gone to the Dogs” – “No one but me will ever know..,” I told myself as I surfed the pet section.

"Free to Good Home," "Desperate need to GET RID of my baby NOW," "Cute Pit Bull Puppies Cheap" – ugh, the ads disgusted me. Imagine being a dog. I would never want to be one of these dogs – not in a million years. They are at the mercy of shoppers who've already proven they don't know what they're doing by shopping for a dog on Craig’s List. How will such people treat any dog they find there?

I was about to log off when I saw the line, “2.5 year old Purebred Cocker” The headline indicated that a picture was present. I had to look. What if it was an English Cocker in need? Three seconds later, a sad, sickly red puppy was looking straight at me. He wasn’t smiling. He wasn’t happy. That picture spoke a thousand words. Depressed. Resigned to his miserable life. He had lost all hope in people. My heart leaped to my throat. He wasn’t my breed but I didn’t care. There was something about that puppy. I knew he needed me. I had to save him.

Wasting no time, I typed away, begging the people to not sell him to some stranger for fifty bucks. I told them about all the creeps in the world (never suggesting that they were creeps themselves), I told them the pup deserved a better chance. I told them that if they’d wave the fifty bucks I would take him.

I looked again at that picture. Something about those eyes made me want to break down sobbing. He didn’t deserve what he had gotten in life.

Staring back at that sorry little pup, I said a prayer, made the sign of the cross and closed the laptop. Putting the computer down, I pulled Storm King closer to my side and tried to forget about the sad eyed pup for a while. It was no use. I didn’t want another dog. I didn’t need another dog – but there was something about his eyes that haunted me.

His sellers called two days later. It was obvious they couldn’t find someone willing to shell out fifty bucks. I was their last resort. I couldn’t get out of the house fast enough – especially for those horrid people who called me twice as I readied my house for leaving. “If you’re not here in fifteen minutes, he’s dead,” they said on my voice mail. I tried to call them back but got their voice mail. Another call came to my voice mail. “We’re on our way to the shelter. It’s too late.” Frantic, I called again. This time the woman answered. She laughed and said that her husband was just making sure I’d come.

I arrived ten minutes later. With a cigarette clinging to her lower lip, a young, pregnant woman opened the door and ushered me inside. The apartment was a dump. The stench of urine soiled carpet and cigarettes made my skin crawl.  “Is the dog house broken” I asked, for the sake of measuring her character. “Yes,” she lied. My estimation was confirmed.

Suddenly a clawing noise gave way to a closet door opening and a little red cocker nosed his way out and trotted over to see me. Have you ever met a total stranger and had the feeling of complete recognition? That’s how it was for this little dog and me.  Our souls leaped for joy at our meeting.

Okay, go ahead and call me a “nut” but I knew this was no accident. He’d been calling me for help in some mysterious non-verbal way. On some esoteric level, I had heard this dog’s cry. Or was it my dearly departed dad who sent me?  .. Or was it the little dog’s guardian angel? How did I know to find him?

His little tail wagged in a circular motion like the propeller on an outboard motor.

With nothing left to talk about, I swept the cocker up into my arms and headed for the door.  “I paid over a thousand dollars for him,” mumbled the pregnant tattoo-girl through her cigarette but clearly she was lying. Around his neck was a cheap grocery store collar with the ID tag from a local shelter still hanging on it. I knew her game. I had seen it before. She was a “shelter-troller” – someone who trolls dog shelters for dogs they can buy on the cheap and flip for a few bucks on the internet or street corners.

As I walked outside towards the car, the frightened cocker’s big brown eyes widened with fear. His tiny, malnourished bod was suddenly weighted like lead. From experience I knew he was shutting down. He was giving up to whatever terrible fate awaited him. My heart broke to realize how terrible his young life must have been that at this age – barely out of adolescence, he already knew how to shield himself against the pain of disappointment and heartbreak.

Stiff as a board he rested in in my arms. I tried my best to tell him that he was finally safe. “No one is going to hurt you darling,” I said to the red pup but he wasn’t listening.

He was already in his safe place where no human could ever hurt him.

Slowly, I opened the hatch of my car, gently placing him inside the awaiting crate. He looked up at the hatch and cowered as it came down. He was so sure he was going to be hurt and yet, he never growled or bared his teeth. “Another character assessment” I thought to myself. This one passed with flying colors.

"Don’t worry my little Red Teddy," I heard myself say. It was then that I realized he had given me the name he wished to be called. “Red Teddy” was not what those horrid people had called him. This was the name he chose for himself. Was it clairaudience? How did I do that?

How did I manage to hear his name?

As soon as he was home, I put him in the tub for a bath. Again, the little dog impressed me.  Never once did he try to growl, fight or bite.  He was a good boy. Naturally he was afraid of the other dogs and naturally they were dying to see him. But that would come later.  It was too soon. I would “fish-bowl” him for a few days. In his own safe x-pen, he could see the other dogs and they could see him but nobody got to touch each other. Nobody would have the chance to defend his turf or fur.

On his first trip upstairs to the living room, I gave him what I believe was the first chew toy he had ever had. Have you ever seen such a dog smile?